Thermal or infrared (IR) imaging in the practice of building inspection has been used to inspect electrical systems for some time now and its use has steadily grown increasingly popular.  Since components in electrical systems almost always overheat before they fail, problem areas are more easily and safely found when viewed through an IR camera.
Infrared imaging allows apparent temperatures to be seen as gradient colors, with hotter spots displayed as brighter colors, and cooler (and wetter) spots displayed as darker colors.  When a malfunctioning electrical component or connection is generating more heat than it should be, its apparent temperature will make it stand out right away when viewed through thermal imaging.

What kinds of problems can be detected? 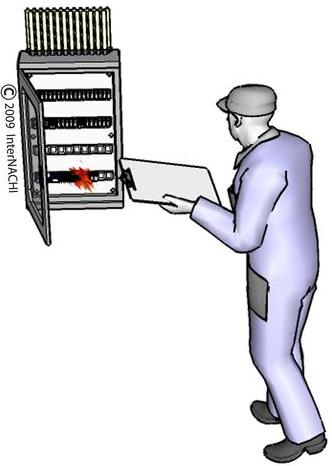 During an inspection, electrical equipment, such as distribution panelboards, switchboards, contacts, transformers, receptacles, and service and control panels, can be examined through an IR camera.  By viewing apparent temperature differences, inspectors can identify and document problems, such as loose connections and overloaded circuits, which are the most common causes of electrical fires.  Other issues, such as transformer cooling problems, induced currents, arcing, and motor-winding faults, also become readily apparent.

Thermal imaging can detect electrical issues that include:

Advantages of Using an IR Camera for Electrical Inspections

Because viewing apparent temperature differences through an IR camera requires no physical contact and can cover a lot of space in one sweep, no other technology allows electrical faults to be found as safely and as quickly as thermal imaging.  Another important benefit is that it allows problem areas and components to be located before damage from any serious failure or electrical fire occurs.  This helps ensure safety.  It can also save money that might otherwise need to spent on extensive repairs.

Here’s a list of advantages of using an IR camera for electrical inspections:

Detecting moisture intrusion problems is an excellent application for thermal 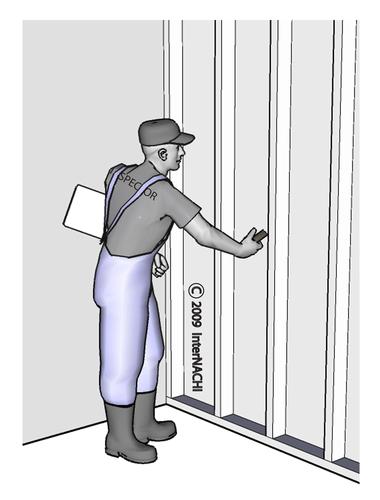 imaging or infrared (IR) cameras.  Moisture intrusion may be identified through basic visual inspection if it has lead to obvious defects, such as staining or mold growth.  By the time visible evidence has presented itself, however, significant damage may have already been done.  In many cases, moisture or water intrusion may have been developing for a while before obvious signs become apparent.  By employing thermal imaging and a moisture meter, inspectors can locate moisture issues before they become large problems and lead to serious damage, as well as gather details in cases where moisture intrusion has already become obvious.

Using an infrared camera provides certain advantages in locating moisture problems.  Thermal patterns created by latent moisture become readily apparent when viewed through an IR camera, even when they are not visible to the naked eye.  This is because the IR camera sees the apparent temperature difference between wet spots and building materials.  Water intrusion and excessive moisture within walls, under floors, and above ceilings will show up in the thermal image.  Water intrusion implies that the house has been compromised somewhere, perhaps through the roof, in the basement, or as the result of a mechanical or plumbing leak.

Thermal imaging can help inspectors locate the sources and extent of moisture intrusion.  Here’s a list of its advantages.

Replacing damaged roofs can cost as much as $8 to $10 per square foot, and billions of dollars are lost every year because of premature roof failure. 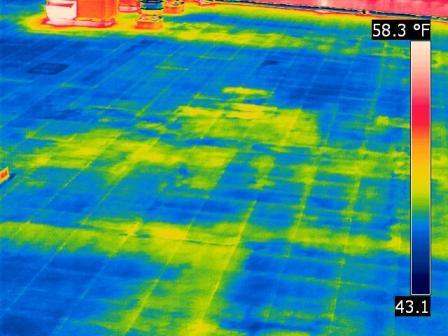 The main causes of premature roof failure and high maintenance costs are moisture intrusion and undetected wet insulation inside the roofing system.  Because thermal imaging makes apparent temperature differences viewable, it is excellent at finding moisture and then documenting problem areas during roof inspections.  The roof absorbs heat during the day and releases it when the temperature falls later.  Wet areas release heat slower than dry areas.  Because of this, the wet and dry areas are readily viewable in a thermal image, which displays apparent temperature differences as gradient colours.

Thermal imaging is non-invasive and allows inspectors to scan large areas very quickly.  More traditional methods require a grid-type contact search, which is very time-consuming for inspectors who choose to walk a roof for inspections.  Core sampling and other invasive testing are destructive and beyond InterNACHI’s Standards of Practice.  Using an infrared camera to locate areas of moisture intrusion and wet insulation is quick, accurate and inexpensive compared to other methods.  Since IR imaging allows problem areas to be located before severe symptoms appear, significant damage can be avoided by catching and addressing issues as they develop.  Thermal imaging can also be performed from an elevated vantage point, allowing an even greater area to be examined at once, and eliminating the need to lug equipment up and down various roof elevations.

Here‘s a list of advantages of using an IR camera for roof inspections:

We charge $250 for our Infrared Thermography. The fee is due on the day and time of the inspection and can be paid in cash, credit card, Apple Pay, Android Pay or INTERAC Flash. HST is extra. If you book an Infrared Thermography at the same time as a Home Inspection, you can add it to that service for just $100, that’s a $150 savings!